Lloyd Meyer has combined a personal interest in music with a successful business career, spanning four decades, in virtually all segments of the musical instruments industry. His interest in music led him to seek a degree in music education in 1963 while also studying business and pursuing a career with the Dayton Hudson Corporation in Minneapolis where he became a Buyer and Department Manager in their Home Entertainment Division. Meyer’s business career was interrupted in 1966 when he was drafted into the U.S. Army Infantry division during the Vietnam War. After his military term, Meyer continued his business education at Harvard University and completed the Harvard University Business School’s Advanced Management Program.

The Columbia Broadcasting System (CBS), under Bill Paley, recruited Meyer in 1978 to join their Musical Instruments Division, which was also based in Chicago. As Senior Vice President of the Division, Meyer had general management and operating responsibility for nine different musical instrument companies, including Steinway pianos, Lyon & Healy harps, Fender guitars, Rodgers church organs, and Gemeinhardt flutes. The Music Division became the largest manufacturer of musical instruments in the U.S. during his tenure.

In 1982, CBS brought Meyer to New York to personally manage the Steinway world wide operations, which had developed serious quality problems and was operating at a significant loss. Meyer was the first President after Henry Steinway to be given responsibility for both the Hamburg and New York factories and the London and Berlin Concert & Artist facilities. Steinway was the most prestigious acquisition by CBS, and it took the direction of Meyer to achieve profitability within the first year, in addition to making significant quality improvements including the elimination of the controversial Teflon bushing in the piano action. Meyer’s gifts of leadership and marketing experience led to other corporate appointments at CBS.

Following the sale of Steinway by CBS, Meyer acquired a major piano rebuilding factory in New York City in 1988, and also established the Renner USA company which is responsible for the product development, marketing, and distribution of Renner piano action parts for North and South America. Meyer continues to own and manage the Renner USA business which now represents the largest source of quality replacement piano parts in the U.S. and Canada. 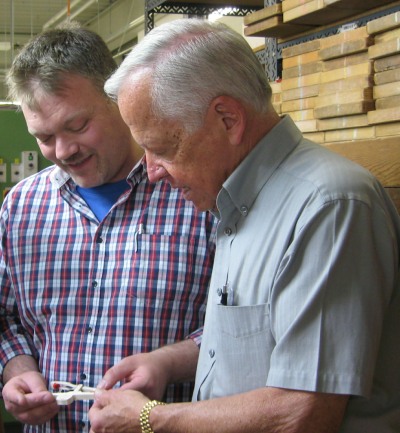 Lloyd inspecting product quality with the production manager at the Louis Renner factory in Germany. 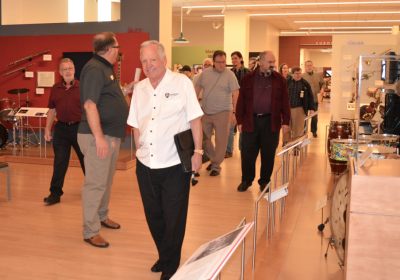 Lloyd hosting the Renner Academy attendees at the Museum of Musical Instruments in Phoenix, AZ