The History and Development of the Modern Piano

The piano is the most popular musical instrument in the world. As a concert instrument and the primary musical instrument in private homes, the piano enjoys a long and colorful history as an important source of inspiration and pleasure for both professional and amateur musicians. Its history is in itself the history of culture. The two oldest, still preserved, pianofortes were made by Bartolomeo Cristofori (1655-1731). The case of one, dated 1720, is in the Metropolitan Museum of Art, New York City. The other, dated 1726, is in a museum in Leipzig, Germany. 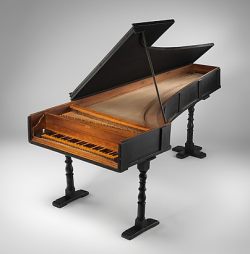 Importance of the Piano Action

The development of the pianoforte to its present form has been decisively related to the development of the hammer mechanism. In 1709, Cristofori achieved the invention of the hammer mechanism, a combination of the beater strike of the dulcimer with the keyboard touch. The new action made it possible for the instrument to play both soft and loud, hence the name pianoforte, and was crucial for the future development of the piano’s expressive capacity. While continual improvements in its action paved the way for the advance of the pianoforte, a half century passed before it was able to overcome the initial objections of decisive figures such as Johann Sebastian Bach, and prevail over the harpsichord and clavichord.

The piano owes its emancipation to Gottfried Silbermann, a superlative craftsman and genius in both the building of organs and piano-making. By 1730, Silbermann had made two pianofortes, and by the end of the decade had produced instruments regarded as completely successful and supported by the leading musicians and theorists of the day, even to the point that Silbermann was for many years regarded as the inventor of the piano! His instruments finally met with the approval of Bach who tested the Silbermann pianoforte at the Potsdam court of Frederick the Great at the wish of the Monarch in 1747. While composers at the beginning of the 18th century concentrated on the harpsichord and clavichord, it was the Bach sons, Philipp, Emanuel, and Christian, as well as Mozart and Clementi, who learned to exploit and appreciate the advantages of the piano, and contributed to its successful introduction around the world.

Evolution of the Piano

The pianoforte has undergone numerous improvements in its details up to the present day. At the beginning, the piano-makers constructed their piano actions “works” themselves. It is estimated that there were about 400 piano factories with more than 8,000 employees in Germany in 1894, quite apart from the many master piano-makers who constructed their instruments with the help of only a few journeymen and apprentices. In Berlin alone, there were more than 200 independent piano-makers at the end of the l9th century. The London World Exhibition of 1851 provided a wide-ranging survey of the achievements of the piano-makers in the first half of the 19th century and of the emergent piano industry. The leading companies exhibited their products which according to the conditions laid down by the exhibition management had to be the outcome of new technical discoveries. The piano was first popularized in the U.S.A. The industrial revolution had facilitated the production of pianos in large numbers. A successful campaign was held in the twenties and thirties of the 19th century, aiming at the introduction of music lessons in America’s state schools. The piano found its way into the homes of the up-and-coming bourgeoisie and was no longer the domain of the aristocracy. 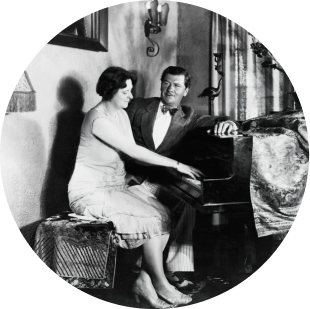 The Beginnings of the Supply Industry 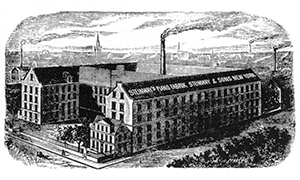 The Beginnings of the Supply Industry

The piano models became more and more uniform as a result of the demands made by industrial production aiming at large piece output. The new models, their production in large quantities and the wide distribution led to a steadily increased specialization in manufacture. Division of labor prevailed and the supply industry began to develop. Companies were set up with the sole purpose of manufacturing individual parts. This was a significant development since all instruments had previously been constructed as a whole, i.e. mechanics, cases and wiring. The suppliers became more and more important. Specialization made it possible to produce large quantities at lower costs, since the production of the mechanism, for example, an expensive and time consuming process, had become too costly and labor-intensive for the individual pianoforte producer, calling for a high standard of skilled workers, materials and instrument-making know-how. Although the piano manufacturers had tried since the beginning of the industrial revolution to incorporate new developing technologies in their production, inevitable limits became apparent and could only be developed and utilized through the emergence of the sub-supply companies.

Originating in America, this development and the process of model adaptation prevailed only gradually in Europe and in Germany. The rise of Germany to an industrial power at the end of the 19th century involved its piano-makers in a rise to hitherto unknown and unexpected status and importance. The progressive companies achieved great advances. Firms such as Ibach, Bösendorfer, Schiedmayer, and lrmler, or “newcomers” such as Bechstein and Blüthner exploited the advantages of technological developments.

Louis Renner began on a very modest level with the production of piano mechanism in October of 1882. Hand-crafted production was at the heart of these beginnings. The history of this company is closely related to that of the German piano industry and the demands of industrial production methods of specialization.

When moving into a new factory building in 1902, Renner employed a staff of 35. This total had risen to 100 by 1911, and a new wing had to be added to the works. Renner had been producing hammers as well since 1906. More and more machines found their way into the production process. Skilled craftsmanship was reduced to the important production stages, above all to the comprehensive controls without which superior quality cannot be produced.

The number of employees had risen to 175 by the First World War. Labor-saving methods were developed parallel to the introduction of the newest machinery. Production was switched to separate drive with hundreds of electric-motors and the production program was rounded off by the inclusion of mechanisms for grand pianos as well. All branches of mechanism manufacturing were now brought together under one roof. 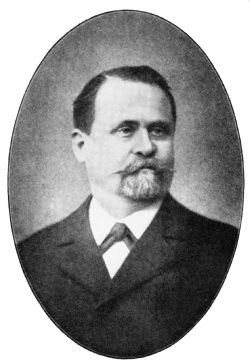 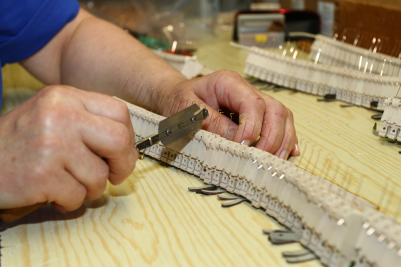 The number of employees rose to 400 in the twenties and thirties, and the factory encompassed 5,000 square meters. The firm’s own power plant with steam turbines and engines produced 410 hp for the entire lighting and the power for about 300 motors running the individual machines.

The complicated extent of mechanism production is particularly apparent if it is considered that over 8,000 sections and small parts, springs and strips have to be put together for one single piano mechanism. It is scarcely possible to enumerate the number of motions and works stages leading to the end-product. Renner is a typical example of German precision industry as it is acknowledged throughout the world. The most modern machinery ensures the highest possible standard of precision and the reliability of the individual sections.

The factory was almost completed destroyed in 1944, but action mechanisms were already being manufactured again in 1948, initially for the German-speaking area, and later for international use. Piano manufacturers all over the world were relying again on Renner products. To supply this increasing demand, Renner has continued to expand its wood storage and manufacturing operations as demand for their products has warranted. All production continues to be done exclusively in Germany by highly skilled craftsmen employing the finest, state-of-the-art, precision machinery, in their recently expanded production operations located near Stuttgart, where the company was founded, and Leipzig Germany.

Renner Expands into the After-Market for Replacement Parts

In 1952, Renner extended its product offering to include repairs and the supply of spare parts and accessories. The existing components section was expanded and a large-scale warehouse was installed. Today, Renner employs more than perhaps 300 people and manufactures using the most advanced machinery and electronically controlled automatic operations. These systems are mostly special developments to meet the particular needs of mechanism manufacture, the great majority of which have been designed and constructed in the company’s own research department. Since 1882, the year it was founded, Renner has produced in excess of two million mechanisms. Daily production amounts to perhaps 90 mechanism for upright pianos, 25 for grand pianos, and 150 sets of hammers. 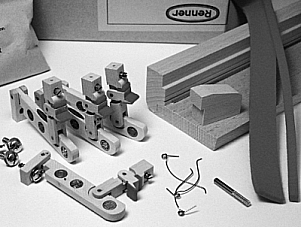 Renner is the largest, independent purely action manufacturer for upright and grand pianos in the world. The company’s success is due to their ability to produce custom made actions for the individual customer. Europe’s largest manufacturer of upright and grand pianos, Wilhelm Schimmel Pianofortefabrik in Braunschweig, is Renner’s biggest customer.  Apart from Schimmel, Renner mechanisms are exclusively used by such reputable companies as Steinway & Sons in Hamburg, Fazioli/Italy, Bösendorfer/Austria, Grotrian-Steinweg, Bechstein Ibach, Feurich, Seiler, Sauter, Steingräber & Söhne, Pfeiffer, Leipziger Pianofortefabrik, Zimmermann, Steinberg, Blüthner, and Förster. In other words, all the German pianoforte manufacturers. Moreover, Renner can count other reputable European pianoforte manufacturers among their customers, such as Rameau, Generalmusic, Petrof, ERA Seidl, Calisia, Legnica, and in Asia such famous companies as Daewoo, Samick, Young Chang, Kawai as well as Musical Products and other smaller manufacturers of pianos. Of course they also supply all well-known companies on the American market such as Baldwin, Charles Walter, and Ravenscroft.

Renner is the only supplier on the European continent to have stood up to the stiff selection process of the pianoforte industry. All other competitors have had to give up. They could not conform to the constantly increasing demands in terms of the best of quality, based on reliability, precision and durability. The end-user, like the German piano industry itself, should also pay attention to the mechanism when buying a piano. It is of central importance for the way in which the instrument plays. The loveliest sound cannot be achieved if the mechanism is not working with the utmost precision. 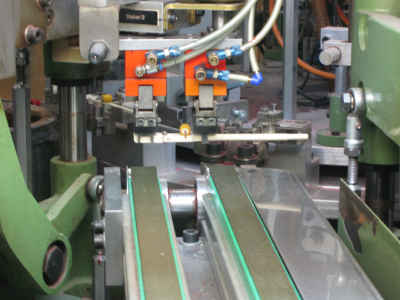 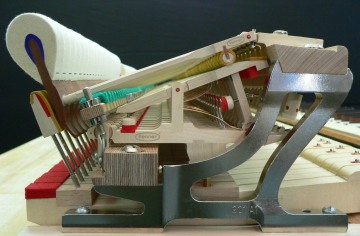 The modern mechanism has become a product of highly developed technology. Operational phases previously implemented manually are now fully automatic. The application of the very latest in modern technology makes it possible to produce with even greater precision and reliability and to constantly raise the production level per employee. Specialization is finally established in the world of piano-making. This is particularly apparent on the sector of mechanism manufacture. Renner has been able to hold its own against stiff competition. Making use of the latest know-how in the application of computers and electronic controls, superior quality is produced, as expressed by the former premier of Baden-Württemberg, Dr. Lothar Späth, who said “Quality is honesty in action.” Or as a Swabian put it: “Quality, that’s a matter of decency.”